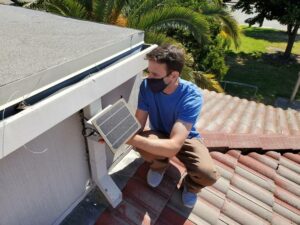 In partnership with the Sacramento Metro Air District, the $500,000 pilot program approved by City Council on Sept. 21 will prioritize placing sensors in neighborhoods that have historically lacked real-time, localized air quality information such as Franklin, Fruitridge, Northgate and Gardenland.

“We (already) have very high-performing regulatory monitors,” said Jennifer Venema, who leads the City of Sacramento Office of Climate Action and Sustainability, “but what we haven’t had is block-by-block neighborhood coverage.”

Researchers have consistently found that poor neighborhoods and communities of color across California and the United States have worse air quality, in part because they are surrounded by freeways and industrial building, and lack green spaces and trees.

“We consistently have neighborhoods with poorer health, poorer air, higher healthcare costs,” said Councilman Eric Guerra, who also serves as chair of the Sacramento Metro Air District. “Those kinds of issues have a trickle-down effect on the economics and health of our community.

But it’s been a trend that, until now, has been harder to track in Sacramento. With the 100 additional monitors, Sacramento will see an unprecedented level of air quality monitoring, Venema said — an important achievement that will be vital in the years to come, as climate change fuels more intense wildfires and more frequent hot summer days.

The block-by-block data could be used by school districts to determine when it’s safer to close school for in-person instruction, Guerra said, or better to keep schools open if students would otherwise experience poorer air quality in their homes.

But Guerra envisions the data will be an important tool to leverage for future climate change initiatives or policy decisions. By understanding trends in air pollution and who’s most effected, that could encourage more investment in, for example, electric public transit. Twin Rivers Unified School District, Guerra pointed out, now has a fleet of 40 zero-emission school buses, and more school districts are doing the same.