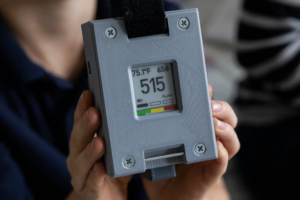 When Lizzie Rothwell, an architect in Philadelphia, sent her son to third grade this fall, she stocked his blue L.L. Bean backpack with pencils, wide-ruled paper — and a portable carbon dioxide monitor.

The device gave her a quick way to assess how much fresh air was flowing through the school. Low levels of CO2 would indicate that it was well-ventilated, reducing her son’s odds of catching the coronavirus.

But she quickly discovered that during lunch, CO2 levels in the cafeteria rose to nearly double those recommended by Centers for Disease Control and Prevention. She shared what she’d learned with the principal and asked if students could eat outside instead.

“He expressed surprise that I had any data at all,” she said.

Ms. Rothwell is one of a growing number of parents who are sneaking CO2 monitors into schools in a clandestine effort to make sure their children’s classrooms are safe. Aranet, which makes a monitor popular with parents, says orders have doubled since the new school year began.

Some school systems have made the monitors part of their official pandemic precautions. New York City has distributed the devices to every public school, and the British government has announced plans to do likewise.