Tracking Air Quality: Data for Our Community and Beyond

Home | News | Tracking Air Quality: Data for Our Community and Beyond 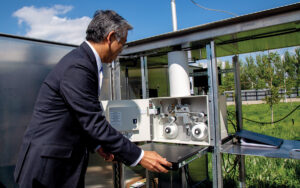 Tracking Air Quality: Data for Our Community and Beyond

Air pollution is an increasing global health threat. From wildfires across Australia and the western United States to the new visibility of the Himalayas in South Asia during the pandemic, 2020 featured drastic changes in air pollution around the world. Long-term exposure to air pollution can cause decreased lung function, lower lung capacity and development of diseases like asthma and bronchitis. More than 80 percent of U.S. embassies and consulates are in areas that exceed the U.S. Environmental Protection Agency’s (EPA) annual air quality standard for fine particles. Since 2008, the Department of State has sought to provide better ground-level data to inform the Foreign Service community, U.S. citizens abroad and the communities where they serve.

The World Health Organization and other international bodies, along with research institutions and the international media, have addressed and reported extensively on air quality. Despite the breadth and significance of the issue and growing interest in it, reliable ground-based data does not exist in many parts of the world. Recognizing this need, in 2008, U.S. Embassy Beijing installed an EPA-approved air quality monitor that provided data to U.S. personnel and citizens to reduce health risks and bolster the public’s understanding of air pollution. Other U.S. diplomatic posts in Mission China and Mission India followed suit, and all continue to provide publicly available air quality data hourly.

To help fill in data gaps elsewhere and ensure a coordinated departmentwide approach, the Greening Diplomacy Initiative (GDI) in the Office of Management Strategy and Solutions partnered with the EPA in 2015 to launch an air quality monitoring program called DOSAir. With the installation of ground-based monitors approved for regulatory use in the United States, DOSAir provides reliable, transparent data to mission personnel and the general public.

Since the launch of the DOSAir program in 2015 by then–Secretary of State John Kerry and former EPA Administrator Gina McCarthy, State has expanded its own network of reference-grade air quality monitors to almost 80 embassies and consulates. The monitors are made in the United States, and installed and maintained by a small American company. The technical requirements and data are all transparent and available to the public.

Read more: Tracking Air Quality: Data for Our Community and Beyond